We are so excited to announce our 2019 Star Award winners!

We were so pleased to be able to present awards to seven special supporters at our Annual Summit 2019: Accelerating Success on Thursday 14th March. We would like to extend a special thank you to everyone who nominated someone for an award this year and to everyone who was nominated. We are HUGELY grateful to every single one of you and hope you will join us in congratulating and celebrating this year’s winners. Read all about them below. 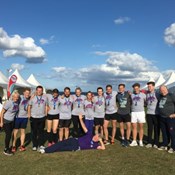 The Purple Star Award is for an individual or group who has demonstrated an outstanding contribution in supporting the work of Pancreatic Cancer UK and is particularly special, as the award was hand-made by Celia Goodman, who sadly lost her daughter to pancreatic cancer in 2010 at the age of 29.

Our 2019 Purple Star winner, Chris Burn, had just finished university when he lost his mother to pancreatic cancer in December 2017. Instead of going travelling on a planned gap year, he set up the Three Bears Foundation together with his father, family and friends, in memory of his mother.  The foundation has their own running team who have taken part in several runs including The Great North Run, The Beverly 10K, the Cardiff Half Marathon and the New York Marathon.  They have also organised their own fundraising events including a charity ball and their own alternative marathon. So far, they have raised over £65,000 for Pancreatic Cancer UK.

Chris was nominated for an award by 12 of his family and friends and is a true ambassador for the charity. He and his dedicated team continue to raise as much awareness and funds as possible, all in an effort to change the experience of other people affected by pancreatic cancer. 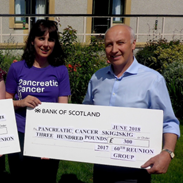 Since her brother was diagnosed with pancreatic cancer in 2016, Kathleen hasn’t stopped raising awareness of the disease. Based in the Isle of Lewis, Scotland, she started by taking on the ‘Skig2Skig’ challenge where she and 60 other recruits cycled 40 miles and walked 10 miles from Skigersta, Ness to Tolsta, and back. She turned the whole island purple for Pancreatic Cancer Awareness Month in November 2017 and started an annual ‘Purple Ladies Day’ to which she invites every woman in her community to wear purple and host a clothes sale and dinner party to raise money. She has raised over £21,000 and also inspired her brother, who, having endured 50 rounds of chemotherapy, took on 3 running and cycling challenges in 3 counties to raise funds. 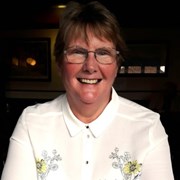 Jean was diagnosed with inoperable pancreatic cancer in 2013 and has not stopped in her efforts to help and support the charity’s work. Her story is viewed on our website more than 600 times a month and she has been the face of social media posts to highlight key symptoms of pancreatic cancer. She is a valued member of our lay information reviewing panel where she provides the voice of a current patient – something that is very much needed in our work. She has also recently helped the research team to produce key messaging for the Precision Panc study.  On top of this, she takes part in fundraising challenges and helps light buildings up in purple every November to raise awareness.

Her ambition, determination to spread awareness, raise funds and also keep smiling and pushing herself further is infectious. She is the ‘hope’ that a lot of families and friends look for when they have a loved one diagnosed with pancreatic cancer. 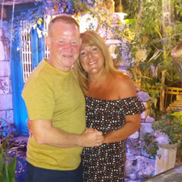 Within a week of losing her husband to pancreatic cancer, Eiryl began making and selling purple bows, raising over £3,000 for Pancreatic Cancer UK within a month.  With the help of the local community, she organised purple light ups all over her town, raising huge amounts of awareness.
Her husband had devoted his life to coaching rugby for children, so she did something remarkable – she organised a huge fundraising day in which the rugby club, whose kit had been red and white for 120 years, unveiled a new purple rugby kit, featuring the pancreatic cancer ribbon, to spread awareness of the disease.  She has now raised close to £10,000 for the charity and her work has caught the attention of several news outlets and has been shared and viewed by thousands of people. 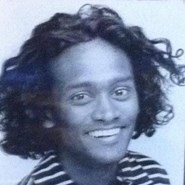 Rosebery School have done an incredible amount of work to raise awareness and funds for Pancreatic Cancer UK since losing their beloved maths teacher, Mr Alan Celine.  They have brought together the whole school community including students, parents and teachers and have sold purple ribbons, held a purple clothes day, baked blueberry muffins and have covered the school in purple decorations.  They began raising money when Mr Celine was first diagnosed and have since received over 800 donations and, to date, have raised over £20,000 for Pancreatic Cancer UK.

We were so pleased to present this award in loving memory of Mr Celine whose wish was for the school to raise funds for Pancreatic Cancer UK so that ‘the odds of survival from this cancer would be better for future sufferers than they were for him’. 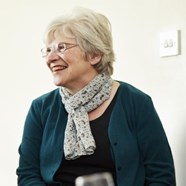 Margaret was diagnosed with pancreatic cancer over 10 years ago, and also lost her mother to the disease.  For several years, she has dedicated her time to help others in a number of roles with the charity.  She is a committed and thoughtful member of our Patient and Carer Advisory Board, she volunteers for our Side by Side peer support service and is an Information Volunteer in the West Midlands, where she provides face to face support and information to newly diagnosed patients and their loved ones.  She also helps lead a support group for people living with and beyond pancreatic cancer.  She never seeks thanks, and quietly goes above and beyond to help others affected by pancreatic cancer every single day. 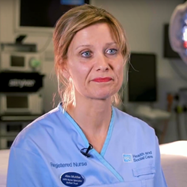 Alex is a specialist HPB nurse in Belfast, who frequently works over and beyond her duty in order to help and support her patients. She has developed the specialist nurse service from infancy and recently secured funding to transform the office into a comfortable & calming space to perform consultations with patients & families within a busy out-patient clinic setting.  She has organised fundraising events for Pancreatic Cancer UK and constantly works to raise the profile of the charity and the needs of patients with pancreatic cancer.