Demand Faster Treatment – a year of campaigning for change

Over 100,000 of you took part in our petition, and we’ve been working non-stop to turn this people power into action

A year ago we launched the Demand Faster Treatment campaign – and we were overwhelmed by the response. Over 100,000 of you took part in our petition, and we’ve been working non-stop to turn this people power into action to improve survival from pancreatic cancer. Together we’ve already achieved so much, and we’re pleased to report a number of significant developments.

Pancreatic cancer doesn’t wait. One in four people who are diagnosed don’t survive more than a month, making rapid treatment essential for survival. That’s why we launched Demand Faster Treatment, calling for treatment within 20 days of diagnosis.

When hundreds of thousands of people across the UK joined us in demanding faster treatment, the issue grabbed the spotlight like never before. We had coverage everywhere from Good Morning Britain to local radio stations across the country. The strength of public feeling so clearly demonstrated through the petition and our hand-in events at No.10, the Scottish Parliament, the National Assembly in Wales, and Stormont in Northern Ireland meant that the NHS and Governments across the UK had no choice but to start listening.

Influencing behind the scenes

Following our petition hand-ins, we secured a high profile Westminster Hall Debate with MPs from a range of parties highlighting the importance of fast treatment, and we met with key Government ministers and senior civil servants to keep the pressure on.  In England, we met with David Fitzgerald, the NHS England Cancer Programme Director. In Scotland, we met with Jeane Freeman, the Cabinet Secretary for Health and Sport.

With NHS cancer waiting times up for review in 2020, this is a key time to lobby for change. So in June we submitted an impactful response to the NHS’s Clinically led-Review of NHS Access Standards calling for faster treatment targets for pancreatic cancer in England. We’ll also be making our voice heard during the development of new cancer strategies in Wales, Northern Ireland and Scotland next year, and as a key member of the Less Survivable Cancers Task force we’ll continue to influence the implementation of the NHS Long Term Plan to ensure pancreatic cancer is on the agenda.

Not only did the model demonstrate what’s possible, it got us noticed, winning us first prize in the NICE Shared Learning Awards 2019. The awards were set up to highlight excellent examples of how NICE guidance and standards have been implemented and promoted in the NHS, local authorities and voluntary sector. 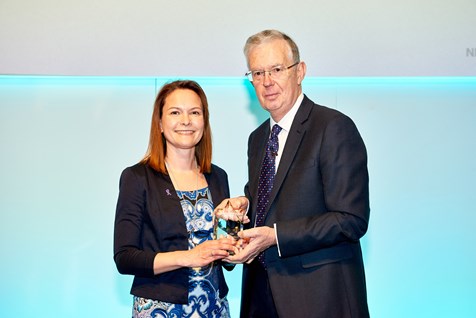 Anna Jewell with Sir David Haslam, Chair of the National Institute for Health and Care Excellence

We were also delighted – just a couple of weeks ago – to win the ‘Campaigning Team of the Year’ Times Charity Award 2019, for Demand Faster Treatment. This is a fitting tribute to Erika Vincent, who played such a key part in the campaign and who sadly passed away earlier this year. It’s also tremendous testimony to all of the supporters across the country who joined us in our petition – this award would never have happened without them. Take a look at us at the ceremony.

The NICE win was a significant step forward in highlighting of the importance of rapid treatment for pancreatic cancer. And because pancreatic cancer really won’t wait, it also presented a crucial opportunity to get on the road to ask other healthcare providers to follow Birmingham’s lead.

So, our Policy team has been travelling up and down the country to talk about faster treatment.

We’ll continue to put pressure on governments and healthcare bodies to beat the deadliest cancer, and we will be making more noise very soon to keep pancreatic cancer in the spotlight. Keep your eyes peeled for the next stage of our campaigning work – and together, let’s take on pancreatic cancer.