I class myself as a lucky man

Chris was quickly diagnosed with pancreatic cancer and, fortunately, was able to have life-saving surgery. Passionate about raising awareness, he backed our 2019 campaign, Unite-Diagnose-SaveLives.

I went to see the GP because I was feeling unwell. I was a bit jaundiced, my feet and hands were itching, and my stools had changed. My GP phoned me, while I was still at work, and she said I had a tumour. It was such a shock because I had always been a very active person. I had a procedure to have a stent fitted which relived my jaundice and when it had gone completely I was then offered surgery.

Only 1 in 10 people who are diagnosed with pancreatic cancer can have surgery, and I was that lucky one. One of the nurses even said to me “You don’t realise how lucky you are, my friend.” That really stuck in my head, especially when I found out how bad the statistics were for pancreatic cancer.

I got diagnosed around the time of my daughter’s wedding and we were worried that I would have to go into surgery on the same day. Fortunately, I had my operation four days after the wedding so I was able to walk her down the aisle. It’s a massive thing in life to give your daughter away and it meant so much to me. I class myself as a really lucky man.

Just before my operation I sat on a bench in Bristol Docks and looked out at all the coloured houses and thought about things, like you do when you have a big life-thing coming up. I thought to myself “It’s going to be a long time before you see this view again. You better make the most of it.” 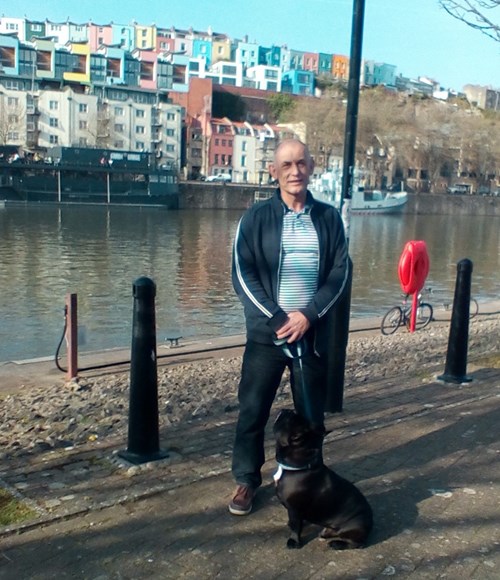 After my operation I was back there again. When I saw that view, I thought, well, that’s fantastic. Each day I walked a bit further along the dock, taking it step by step and making sure I didn’t overdo it. I now have a picture of that view on my wall because it was one of the things that kept me going in a difficult time.

I know I was one of the lucky ones. In fact, I know that all too well because whilst I survived my pancreatic cancer diagnosis, my own relative, who was on the Oncology ward with me and also having treatment for pancreatic cancer, did not.

That’s why I’ve taken part in two clinical trials so far because I want to help as much as I can. Unfortunately, doctors don’t have a simple test to diagnose pancreatic cancer but with your help, they could have one by 2024.

I was in the hospital for eight days and as soon as I left I got a FitBit. I’ve always been into fitness and very active, it’s one of my ways of dealing with things. With me being me, the main fear was that I would try to overdo things. I worked on my fitness one step at a time, making sure I took my doctor’s advice of listening to my body and taking it slow.

After my surgery I went through 18 rounds of chemotherapy. Each time I went I counted down how many I had left because you can only do them one at a time. You need to get through each step as it comes, that’s the only way I managed to deal with it. The chemo affected me quite badly and it affected my kidneys.

Since my treatment, I’ve gone back to work and all of my other normal activities now. I’ve been scuba diving and training for the Jurassic Coast Challenge. I’ve even got plans to do a tandem sky-dive. Some things have changed and I do have to take Creon every day. I always was quite a happy-go-lucky person anyway I think your mind is a very powerful thing and I think that helped me with everything. I’m realistic about things but I know I’m very lucky. If things had gone differently, I would have missed out on so much including meeting my 6th grandchild, Regan.

But I don’t want to be just one of the few lucky ones. I want a future where everyone with pancreatic cancer survives.

Together we can unite and fight for early diagnosis and save lives.